Theodorakis to Repousi: Leave If You Don’t Love Greece! 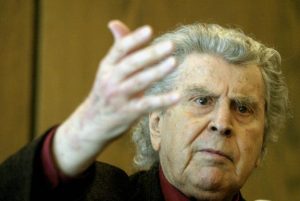 During his interview on the occasion of the centenary of the union of Crete with Greece, Greece’s best-known living composer, Mikis Theodorakis, strongly criticized Democratic Left’s deputy and historian, Maria Repousi for her statement that, “The Dance of Zalongo is a national myth.”
Theodorakis talked about “national nihilism” and pointed out to the deputy that she should feel privileged to be living in Greece.
Theodorakis stated that he is rooted in the political left and the political left in Greece derives from the same root as the Greek Revolution for Independence in 1821.
He added, “If I had the power I would tell Repousi: it is your privilege that you live in Greece. If you are unable to understand it, go live in Nigeria.”
Democratic Left deputy, Maria Repousi, chose to answer all criticism and verbal attacks she received during the last days through an article she had published in the paper, Efimerida ton Sintakton, where she maintained that “whoever does not agree with the prevailing views is in danger.”
Moreover, Repousi noted that, “From the regime of national correctness, we’ve passed to the regime of national terrorism,” a phrase expected to trigger further reaction.