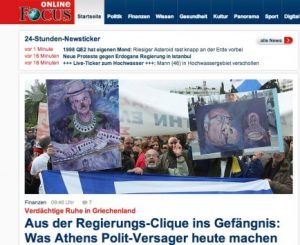 “Looks can be deceiving: The calm that seem to generally prevail, the lack of mass protests on the streets of Athens, the claim that the country’s exit from the euro has been avoided, at least according to the estimates of the Bank of Greece, are not convincing,” Focus stated and continued to list the reasons why the first signs of improvement in the Greek economy are doubtful.

The magazine focuses its criticism on the works on arterial routes, the privatizations, the health sector, and the public administration as well.

The magazine also quoted references made by the governor of the Bank of Greece, Georgios A. Provopoulos about the menaces of bankruptcy faced by even healthy businesses, while it strongly criticizes the Greek Ministry of Finance saying that it strangles liquidity.

The risks faced by the insurance system and the health system are also mentioned, while there is special reference to the leaflets distributed by the doctors of Erythros Stavros (Red Cross) Hospital with which they informed the patients that due to the cuts there were important limitations to the offered health services.