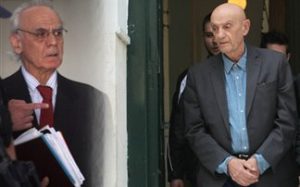 Former Greek defense minister Akis Tsochatzopoulos’ cousin Nikolaos Zigras gave more damning evidence in the former minister’s corruption trial on May 31, alleging a series of kickbacks from defense contracts took place.
Appearing at the Athens Court of Appeal which is hearing the case against Tsochatzopoulos and another 18 others accused of a massive money-laundering scheme, s Zigras told the court that he carried a suitcase of cash to the former minister.
He said he got it from former Cypriot Interior Minister Dinos Michailidis for the purchase of a house on Deinocratous Street, in the upscale Athens’ district Kolonaki, for Tsochatzopoulos’ daughter.  “The suitcase was delivered to me from Michailidis and I took it to Tsochatzopoulos,” Zigras said.
President: “Did you open the suitcase? Did you see that there was cash in it?”
Zigras: “Tsochatzopoulos opened the suitcase in front of me and it had about 80 million drachmas,” which was about $235,000.
Zigras also told the court that at that period one of the offshore companies allegedly set up to cover the track of theft was listed as wanting tko buy the property. “I didn’t know this house. It was chosen by Tsochatzopoulos,” he said..
As it was made clear by Zigra’s advocate, Mr. Stelios Garipis, his client has nothing to do with his co-defendants, as all the orders were coming from Akis, as he said.
However, these statements of Zigras, caused the remark of the president of the court, Mr. Christos Katsianis, who told to the accused: “So, now you are giving us your apology by installments?”
Finally the court decided not to allow further examination of the accused people at this stage of the trial, with the exception of clarifying statements which can be made by the accused, if necessary.