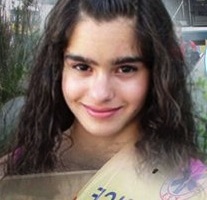 Thirteen-year-old Christina Krassa, who disappeared from her home in Spata, Attica, on May 26, was found by the Hellenic Police in Loutra Eleftheron, a small spa town in Kavala, that is 33 km away from Palio Tsifliki, where the 23-year-old man of Albanian descent who seduced her lives.
It seems that Marjon Ajazi was aiming at taking the 13-year-old to his house, but allegedly when he heard about the mobilization to track the girl, they left together for an unknown destination.
On the morning of May 27 they were found in the forest area of Paggaio in Kavala, where the police detected two abandoned houses the child and the adult spent the night, as well as a farm they visited in search of food and water. Christina’s position was spotted through her mobile phone as the girl had contacted her close friend to say she was safe and out of danger.
The police conducted a long day and night search in the mountain, but did not manage to locate them. At the same time, police patrols conducted investigations in the region of the beach from Ofrynio to Nea Peramos, located approximately 18 km from Kavala, checking all cars passing to or from Kavala. One of these police patrols found the girl walking all alone a little before midnight on May 30 near Loutra.
The 13-year-old was in good health, but was transferred to Kavala hospital for preventive care.
Marjon Ajazi’s whereabouts were nowhere to be  found, while 13-year-old Christina would not reveal where their paths broke, intending to protect him from being arrested. After investigations, Ajazi was apprehended on the afternoon of May 31.