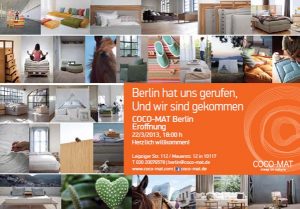 Coco-Mat, the Greek company of mattresses with all-natural materials opened a new store in the German capital on May 29 in the presence of the Greek ambassador in Berlin, Panayotis Zografos.

The new store, located in the center of Berlin, operates as a concept-store, where products by Greek creators and producers are hosted, as well as certain clothes, jewellery, accessories, decorative objects, cosmetics and food items by the companies ZEUS+ΔΙΟΝΕ, citrus, PentheRoudakiS, Iktinos Marmaron, Korres, Dolly Boucoyannis, Tsanos and 157+173 designers.

Pavlos Evmorfidis, the company’s founder, presented Coco-Mat and his colleagues to the German public on May 29, saying that 25 years ago he was poor but had no lack of ideas. The company’s goal is the foreign public’s acquaintance with the Greek product, the creation of chances and capabilities for Greek businessmen and the “promotion of an image of creation, development and hard work on behalf of the country in extremely harsh times,” as Evmorfidis said.

He invited the more than 200 attendants to visit Greece and see up close the production modes of the products distributed in his company’s stores.

Among the attendants was New Democracy MP, Kyriakos Mitsotakis, who clarified that he has not visiting the German capital with his parliamentary status, but “as the husband of one of the creators that distribute their products in the new store,” Mareva Grabowski, for the company ZEUS+ΔΙΟΝΕ.

Mitsotakis expressed his satisfaction for the Greek companies’ activity abroad, which gives a hopeful message for Greece and wished that other companies will follow the same-international course as well.