Theodorakis Named To Academy of Athens 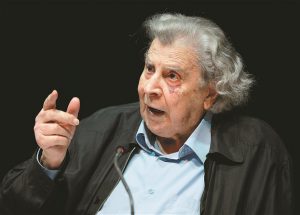 After composing and conducting more than 1,000 pieces of music and known as one of Greece’s greatest musical geniuses, Mikis Theodorakis was elected an Honorary Member during the plenary meeting of the Academy of Athens.
He was honored for being one the leading figures of modern Greece, for his artistic work and for his contribution in the struggles for Freedom and Democracy.
Theodorakis was born on the Greek island of Chios and spent his childhood years in different provincial Greek cities such as Mytilene, Cephallonia,Patras, Pyrgos, and Tripoli.
In 1943, he went to Athens where he studied at the Athens Conservatoire under Filoktitis Economidis until 1950. In 1954, he traveled to Paris where he entered the Conservatory and studied musical analysis under Olivier Messiaen and conducting under Eugene Bigot.
Theodorakis has composed in many different styles of music: Chamber Music, Symphonic music, Ballets, the unforgettable film score for Zorba The Greek, and has written music for plays and films. Among his famous works in Greece that have become part of the heritage are  Sto Perigiali, Kaimos, Aprilis, Doxa to Theo, Sotiris Petroulas, Lipotaktes, Stis Nichtas to Balkoni, Agapi Mou, Pou Petaxe T’agori Mou, and Anixe Ligo to Parathiro.