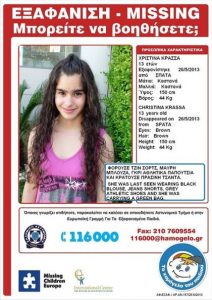 A large police operation has been underway in Kavala, to locate 13-year old Christina Krassa, who disappeared from her home in Spata, Attica, on May 26. Children’s charity, The Smile of the Child, issued an Amber Alert for the girl just hours after she went missing.
Latest information shows that the police have traced the minor in the forest area of Paggaio in Kavala with a man of Albanian descent. They have detected two abandoned houses where the child and the adult spent the night, as well as a farm they visited in search of food and water.
According to the head of the Kavala police directorate, Makis Koskeridis, helicopters with infrared cameras have been investigating the region of the Paggaio Municipality.
“If they remain in the area, inside the woods, we think that we will find them today,” he noted.
The police released the photo of the 23-year-old young man from Albania. His name is Ajazi Marjon of Fatmir and Razie, born on 25/03/1990 in Albania, and is a temporary resident of Loutra Eleftheroupolis in Kavala.
According to the Greek Police, the 13-year-old girl left with the 23 year-old from Athens and traveled all the way to Kavala.
The police investigation revealed that the Albanian adult, who had frequent contact with minors through social networking (Facebook), is involved in her abduction.