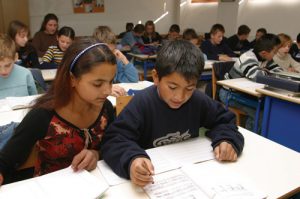 The case, Lavida and Others v. Greece concerning, according to the ECtHR press release, the education of Roma children who were restricted to attending a primary school in which the only pupils were other Roma children.The Court found that the continuing nature of this situation and the Greek state’s refusal to take anti-segregation measures implied discrimination and a breach of the right to education.”

Twenty three Roma parents applied to ECtHR after their children were excluded from primary schools in the town of Sofades, Karditsa. When the parents complained, they received the answer that their children should go to schools attended exclusively by children belonging to the Roma community in order to complete their obligatory education.

ECtHR decided that Greece has to pay 1,000 euros to each applicant, as an allowance for non-pecuniary damage and 2,000 euros for legal expenses.

The applicants were represented in court by the Greek Helsinki Monitor (GHM).