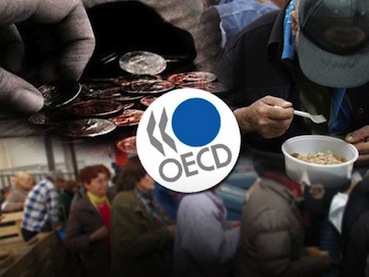 Busting another myth about Greeks – apparently they aren’t as lazy as the German say – the Parish-based Organisation for Economic Co-Operation and Development (OECD) has reported that they worked 2,032 hours a year in 2011, considerably higher than the OECD average of 1,776 hours. Only those in Mexico (2,250 hours) and Chile (2,047 hours) worked more.
Despite the long hours – longer than the Germans – Greeks were paid an average of , yet average annual disposable household is €15,800, ($20,3370) less than the OECD average of €17,820 ($22,937) a year.
For all that, Greeks are less satisfied with their lives than the OECD average, with 71% of people saying they have more positive experiences in an average day (feelings of rest, pride in accomplishment, enjoyment, etc) than negative ones (pain, worry, sadness, boredom, etc). This figure is lower than the OECD average of 80%.
Those were some of the statistics used to determine Greece’s ranking on the OECD’s better life index, which was published on May 28. Greece ranks 30th out of 36 countries in terms of overall well-being and happiness, according to the report. Only Estonia, Russia, Brazil, Chile, Mexico and, in final place, Turkey fared worse in the findings, which showed Australia to be the best place in the world to live and work.
Portugal, also hit hard by the Eurozone crisis, was ranked 28th, while Ireland came in 15th position.
The Germans, often portrayed as Europe’s hardest workers, clocked in on average 1,413 hours a year. With 1379 hours a year, only the Dutch worked less in the 36 countries surveyed.
Almost 5% of Greek employees work very long hours, lower than the OECD average of 9%, with 6% of men working very long hours compared with 4% for women.
Having a good education is an important requisite for finding a job. In Greece, 65% of adults aged 25-64 have earned the equivalent of a high-school degree, less than the OECD average of 74%.
This is equally true of men and women. In terms of the quality of the education system, the average student scored 473 in reading literacy, maths and science in the OECD’s Programme for International Student Assessment (PISA). This score is lower than the OECD average of 497. On average in Greece, girls outperformed boys by 14 points, more than the average OECD gap of 9 points.
In terms of health, life expectancy at birth in Greece is almost 81 years, one year higher than the OECD average of 80 years. Life expectancy for women is almost 83 years, compared with 78 for men.
The level of atmospheric PM10 – tiny air pollutant particles small enough to enter and cause damage to the lungs – is 31 micrograms per cubic meter, considerably higher than the OECD average of 20 micrograms per cubic meter.
Greece also performs below the OECD average in terms of water quality, as 69% of people say they are satisfied with the quality of their water, below the OECD average of 84%.
Concerning the public sphere, there is a moderate sense of community and moderate levels of civic participation in Greece, where 81% of people believe that they know someone they could rely on in time of need, lower than the OECD average of 90%.
Voter turnout, a measure of public trust in government and of citizens’ participation in the political process, was 62% during recent elections, below the OECD average of 72%.
The Paris-based think tank measured 11 topics to gauge general well-being in a country, comprising community, education, environment, civic engagement, health, housing, income, jobs, life satisfaction, safety and work-life balance. Turkey was the lowest ranked of the 36 countries the OECD surveyed, with poor readings for almost all the topics.