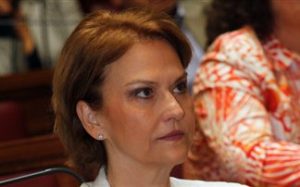 The stance Maria Repousi took concerning “the congestion of Greeks” in the port of Smyrna in 1922, which she herself withdrew from the school text book she had written, was a reminder to many of her request to exclude from the anti-racism bill the criminalization of the denial of the genocide of Greeks and Pontian Greeks from Asia Minor. Both genocides have been unanimously recognized by the Parliament since 1998.
Repousi’s specific stance was revealed in a letter she wrote that was published. In the letter she allegedly addressed SYRIZA MP’s asking their support in order for the provision not to be passed. The letter was actually sent, not to the SYRIZA Human Rights committee, but to the president of the Democratic Left (DIMAR) Fotis Kouvelis, “in the framework of the exchange of views between historians,” as Kouvelis’ associates said.
And maybe Repousi has refuted through her personal Twitter account that the recipients of the letter were members of the Committee of SYRIZA, but she didn’t do the same regarding the stance she took. In a post on Facebook, she wrote on May 28 that she has reservations about the “criminalization of memory,” which, however, as she noted, “is not included in this specific bill”.
This is what Repousi posted:
“I support, as I have stated publicly, the initiative of the Ministry of Justice for the new anti-racism law and I have no reservations for any of its provisions. Any reservations expressed by me or other historians concern the criminalization of memory and are not included in this specific bill. And perhaps, needless to say, that I haven’t sent any relevant letter to the Human Rights Committee, or to any other SYRIZA committee.
Democratic Left rushed to keep the necessary distance, with Kouvelis’ associates speaking to protothema.gr about “personal views”.

Temperatures in the Eastern Mediterranean are rising three times faster than the global average, with the effects of climate change already felt in Greece.
Diaspora

Marketing genius can take many forms -- from the "Music Man" salesmen of the early 1900s, selling band instruments to poor townspeople -- to...
Charity