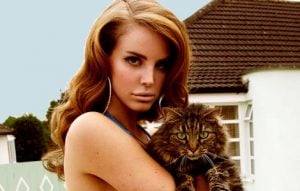 After enough waiting, finally the 27-year-old songwriter/singer Lana Del Ray is coming to Greece, where she will appear at the Rockwave Festival along with Echo and the Bunnymen, on July 8.
Lana Del Ray with obvious music influences from Kurt Cobain, is especially appreciated by music lovers of all kinds since she combines the 50’s femme fatale of rock (in appearance and voice) and is considered as the new music it-thing. Before 2011 when she became widely known, she had already released two albums signed with the name Elizabeth Grant (which is her real name). However, the big success came with the single, Video Games. Indeed, her Born to Die album topped the charts in seven countries from the very first week of its release, while she has also won numerous awards from various countries.
The Rockwave Festival has also hosted many other Greek and internationally known music stars, such as Slipknot, Patti Smith, Garbage, Placebo, Oasis etc. This year, the musical event will take place on July 7, 8 and 9, while the three-day anniversary tickets pre-sale has already begun since last month.