Greek-Russian Astronaut Ready for Take Off 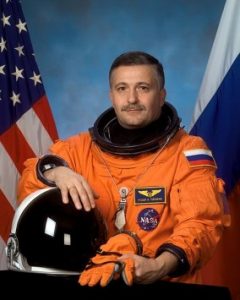 Many Greeks around the world will never forget the moment when Yurchikhin, the first cosmonaut of Greek descent, brought on 8 January 2003 to the then president of the Hellenic Republic, the Greek  flag he had with him on his first space flight.

Greek-Russian cosmonaut Fyodor (Theodore) Nikolayevich Yurchikhin (his mother’s name was Grammatikopoulos) is getting ready for his fourth space flight, which will start in a few hours (at 00:31, on the morning of May 29) from the legendary Baikonur Cosmodrome in Kazakhstan. The Italian cosmonaut Luca Parmitano (European Space Agency) and American, Karen Nyberg (NASA) are the other crew members.

The Greeks of Russia may not have gathered to wish Yurchikhin a good journey this time, but the Greeks of Moscow wrote a letter to their own Hero of Russia (the top prize with which he was honored a few years ago) and of Pontus.

“We, the Greeks of Russia, we are with you, with your family and your parents, your mother Mikrula and your father Nikolai, your brother Panagiotis, who live in Thessaloniki…” they wrote among others.

“He may be a Russian cosmonaut and a citizen of Russia, but we should not forget that he is a son of Pontus, and he gives us the chance to be proud of our nation and to get more strength to continue,” Nikos Sidiropoulos, journalist and a member of the Greek community in Moscow told AMNA.