Warm Welcome for Meimarakis in Ottawa 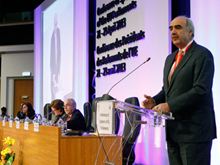 The Greek community of Ottawa warmly received the President of the Greek Parliament Evangelos Meimarakis, who arrived in the Canadian capital on May 26 for a series of contacts with the parliamentary leadership of Canada.

In the crowded and enthusiastic hall, the president of the Hellenic Community of Ottawa Jim Reklitis, welcomed Meimarakis and referred to the course of the Greek community of Ottawa and to its ties with Greece.

The Greek Ambassador to Canada Eleftherios Angelopoulos, presenting Meimarakis, developed the objectives of his visit in Canada, which, as he said, promotes the image of Greece.

Meimarakis referred to the reversing of the negative climate for Greece and stressed that the crisis taught the Greeks to cooperate. He talked about the confidence in the coalition government and in his boss, Prime Minister Antonis Samaras, who is navigating, as he said, the country to the right path.

Meimarakis highlighted the role of the Greek Diaspora of Canada, which, as he said, is the bridge that links Greece with Canada, recognizing in that way its long and continuous contribution.

Among the celebrities attending, were the judge of the Supreme Court of Canada, Andromache Karakatsanis; the Vice-President of the Canadian Museum of Civilization Corporation Jean-Mark Blais; Father Alex Michalopoulos and other personalities of the Greek Diaspora in Ottawa.