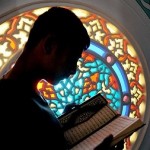 The Greek government has appointed 90 chaplains to teach the Koran in Greek to minority children at mosques and state schools in the northwestern province of Western Thrace, annoying Muslims who said it is a violation of the freedom of religion in the country.
“The children of minority families studying in government schools in Western Thrace will be taught the Koran in the Greek language,” an addition to the legal regulation 240 Imams law prepared in the Parliament was quoted by The World Bulletin and reported by OnIslam. The law states that the chaplains will be Greek citizen and members of the minority in Western Thrace.
The law, which was drafted unilaterally without consulting the minority population, was adopted despite strong opposition from members of the Turkish minority and criticized by the Federal Union of European Nationalities (FUEN.)
Giving the state the authority to elect mosque imams and chaplains, the new law also states that the officials serving in Western Thracian mosques will be appointed by a board of five persons including Christian Greek citizens. Muslims account for nearly 1.3 percent of Greece’s 10.7 million population.
Anti-Muslim tide has been on the rise in debt-hit Greece, which is battling a growing recession that has brought thousands of job layoffs and as the Greek government plans to renovate a building in Athens to create the country’s first official mosque, with the neo-Nazi Golden Dawn party promising to mobilize a 100,000-person march in opposition.
In 2011, Muslims holding an open-air prayer near the city center in Athens to celebrate `Eid Al-Adha, were harassed by local residents who threw eggs at them and blared loud music from windows. Tension has been rising between Greek Orthodox nationalists and with deep memories of the 400-year Ottoman occupation which ended 200 years ago.
Critics also point out that Turkey and other Muslim countries, which want a mosque in Athens, won’t allow Christian churches there and that Turkey is making moves to turn Agia Sophia, the former Orthodox Patriarchal basilica in Istanbul, and now a museum, into a mosque. Turkey wants to join the European Union but has been criticized for lack of religious tolerance.