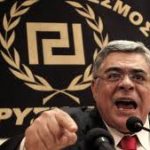 Supporters of the Greek neo-Nazi Golden Dawn party made death threats as they were ousted from a Greek-American documentary screening in New York they tried to disrupt with the use of a megaphone in a post-film discussion, shouting “Commies, you will die!” as they were pushed and shoved out the door.

The incident occurred on May 24 at the Stathakion Cultural Center in Astoria, during the screening of Greek-American Radicals – The Untold Story, a historical documentary about the journey of Greek-American radicalism.

The documentary presents a forgotten page of Greek immigrant experience in America: the role of immigrants in the radical labor movement in the US and the journey of the Greek-American left from the early 20th Century until the years of McCarthyism and the witch hunt against suspected Communists.

Four young Golden Dawn members were among the audience at the packed theater and when the screening ended they attempted in intervene as discussion began, sparking strong reaction from the event organizers, making their threats as they were ejected, EnetEnglish reported

This is the fifth time in a  year that members of Golden Dawn have made their presence known in events in New York.

Greece to Further Boost Security at Evros Border with Turkey