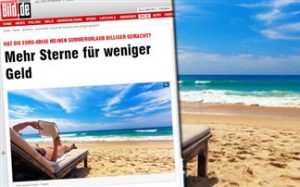 The German newspaper Bild invites German citizens to choose Greece for their summer holidays, as it could be a cheap destination because of the financial crisis the country is going through.

“Holidays are shorter in duration, our wallet will be tighter,” as reported in the newspaper which poses the question: “Are the EU countries that are facing an economic crisis, such as Spain and Greece, good destinations to take cheap vacations?” The article has the title, Will my summer holidays be cheaper due to the euro crisis? More stars with less money.

According to Bild, travelers can choose between the Greek islands Rhodes and Crete, because one can find rooms even in 4-5 star hotels at very good prices, as Tim Holzapfel, head of the touristic site, reported. “Flight and all inclusive accommodation in superior room in Lydia Maris hotel will cost €499. A real opportunity.”

The article recommends restaurants where Greeks eat, so visitors can enjoy food at good prices.

Bild also recommends the Canary Islands if travelers want to buy cheap jewellery, as well as Egypt because holidaymakers will not be disturbed by the political conflicts. Turkey is suggested to those who want haggling.

The article reported that for the year 2012 the countries facing an economic crisis showed a decrease in bookings, which reached almost 10 percent and as a result, businessmen lowered their prices. In 2013, these countries are ideal destinations for cheap holidays.