Child Vanishes Every Day In Greece 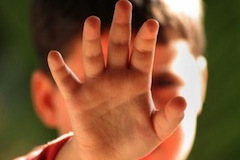 The Greek NGO specializing in helping children, Smile Of The Child, reported that a child goes missing or runs away every day in Greece, data it released to coincide with International Missing Children’s Day which is annually celebrated on May 25.
In the first four months of the year, the agency said that 138 minors disappeared, of whom 90 were found. Introducing the official statistics over missing children, Antonis Papantonis, a spokesman for the police department’s missing persons unit, said most are connected to family problems and that girls are 2 1/2 times more likely to run away.
Of the 34 cases in which the agency provided specialized services, all the missing children were found, along with another child who had disappeared in 2012. Among the reasons that lead minors to disappear, 46% is linked to family relations, 30% to relations with the other sex, then mental health problems at 14%.
According to international statistics on missing children, 800,000 missing children are reported each year in the U.S., some  2,000 per day, while 100,000 children are being sought in Germany each year, 20,000 children are reported missing each year in Australia and 45,000 children in Brazil. In 2012, 13,455 children disappeared in Russia, with 1,382 still to be found.