The Richest Greeks of Australia 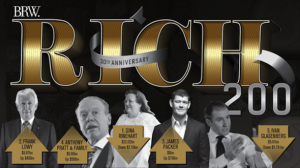 Seven Greek-Australians are among the 200 richest people in Australia, according to the list published by the financial magazine BRW.

The richest Greek in Australia is Kostas Makris, the former owner of the Greek football club Panachaiki, with 900 million dollars. Over the previous years, Makris was the only Greek-Australian billionaire.

Makris and his son Ross are the biggest real estate owners in South Australia. Furthermore, he recently bought the Marina Mirage on  Queensland’s Gold Coast.

The businessman emigrated to Australia in 1963.  In the beginning he worked in the foundries, then bought a chain of Fast Food restaurants and then he switched to the real estate sector. He bought the first shopping center with the proceeds from the sale of the Fast Food restaurants in the 1980’s.

Today he owns many shopping centers, the Optus House in Adelaide and the Bonnyridge Plaza on the outskirts of Sydney, while he also has businesses in Greece , where he often enjoys the sea with his expensive yacht, Ouzo Palace.

Ross Makris started cooperating with his father in 1987 and founded the company Precision Investment Corporation in 1995, as his own investment vehicle. His first property was a shopping center he acquired by his father. He continues to work with his father in the headquarters of their company, but they maintain separate businesses. Their plan for the time being is the development of their shopping shops, in order to increase their useful floor space. In the future they will turn to other states.

In the second place, from the Greek side, is Kerry Harmanis with 590 million dollars. Harmanis has advice for those who want to succeed. “To spend at least ten minutes every day for…quiet personal meditation.”

In the 3rd place is Theodore Karedis, who has Theo’s Liquor chain of liquor stores and whose fortune amounts to 490 million dollars. He has also made many investments in the real estate sector.

Then follows the Stamoulis family, founded by Spyros Stamoulis. Today the company’s head is his son Harris Stamoulis. The fortune amounts to 480 million dollars.

In the fifth place is Nick Politis, with 360 million dollars.

In the sixth place of richest Greek-Australians is George Koukis with a fortune of 320 million dollars. Koukis, who was born in Chalkis and grew up in Australia, is the owner of a technological company based in Switzerland. He is a main shareholder of the company Temenos, which is listed in the Zurich stock exchange and according to the prestigious financial magazine Bilanz, George Koukis is the fifth richest Greek in Switzerland.

In the seventh place, is Melbourne’s travel agent from Kefalonia, Spyros Alysandratos, with 285 million dollars.

The list does not include the Paspalis family, who was second last year, with a fortune amounting to 900 million dollars.

In the first place remains Gina Rinehart, the world’s richest woman, despite the fact that last year she saw her fortune reduce by one-third due to the crisis in the Australian mining industry. Although she lost 7 billion dollars, Rinehart remains the richest woman in Australia with a fortune of 22 billion dollars.

In the second place of the 200 richest Australians is Frank Lowy with 6,87 billion dollars and in the third place is James Parker with 6 billion dollars.