Kremlin’s Wine is Made in Mount Athos 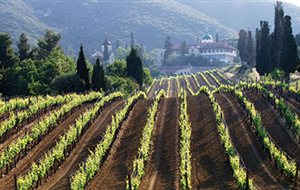 The wine served to official guests in Moscow Kremlin, Russia, who are usually leaders of foreign states, is made in the vineyards of Mount Athos. Its name is Kormilitsa and bears the title of Kremlin’s Official Wine. The Russian host does not only serve the wine, but often offers one or more bottles to his important guests as a souvenir.
Kormilitsa wine is produced at the Metochi Chromitsa of the Holy Monastery of St Panteleimon on Mount Athos. Kormilitsa Red, with limited production from the organic vineyards of the metochi, has been certified as the official wine of the Kremlin.
In 1973, Evangelos Tsantalis envisioned the renaissance of the Vineyard in Metochi Chromitsa, which was abandoned, and overcoming difficulties, such as non-existent roads and lack of electricity, he created one of the most exquisite and qualitative vineyards in Europe.
In September 2005, the President of Russia, Vladimir Putin, visited the Holy Monastery of St Panteleimon and was offered an aged red wine, bottled especially for him. Putin was impressed by the wine, a fact that was extensively covered by the Russian media.
All Kormilitsa bottles bear the Kremlin’s coat-of-arms, as in 2007 Tsantalis was named “Official Supplier of the Kremlin”.  A group of specialists from the Kremlin carried out a thorough study on each stage of cultivation of vines and production of wine for more than three years.