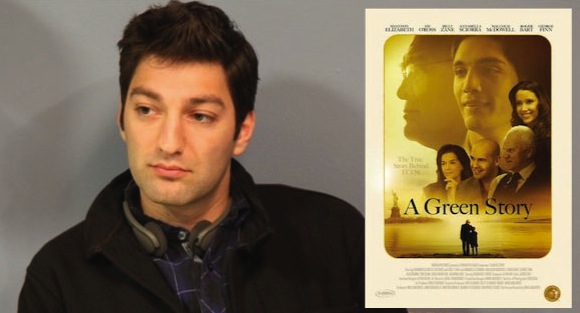 When Nika Agiashvili was a kid growing up in the Republic of Georgia, he had hopes of living the American dream. At the young age of 5, he was cast as the lead in a movie, but realized it wasn’t being in front of the camera that appealed to him; he had a fondness for the director’s chair. In 1991, his dreams started to become a reality after he moved to the U.S., learned English, and then headed to Los Angeles a few years later to attend film school.

Agiashvili wrote, directed and produced his first feature, “5 Nights in Hollywood,” in 2009. While looking for a second project to work on, he found it in a story that not only struck a chord with his own aspirations before heading to the States, but also with so many others in search of the American dream.

“A Green Story,” written and directed by Agiashvili, is based on the life of Earth Friendly Products’ Greek founder, Van Vlahakis, and tells a tale of determination, perseverance and success. Vlahakis, who hails from Crete, left Greece fifty years ago with just $22 in his pocket. Arriving in the U.S. hoping for a better future for him and his family, the entrepreneur and chemist was driven to create environmentally friendly cleaning products, which ultimately lead to the formation of his own company, Earth Friendly Products.

Agiashvili rounded up an ensemble cast – including Ed O’Ross, Shannon Elizabeth, George Finn, Billy Zane, Malcolm McDowell, Annabella Sciorra, Louis Mandylor and Alexis Georgoulis – to bring Van’s story to the big screen. As the talented filmmaker gears up for the release of “A Green Story” in U.S. theaters on Friday, May 24, Greek Reporter sat down to talk with him about the movie, his career, and how Greeks gave a (welcomed) helping hand with the project.

How did you get involved with “A Green Story”?

Van and Kelly [Vlahakis] have been family friends for a long time. I knew Van’s story, and I knew about Earth Friendly Products, and I knew a little bit about what they were doing, but I didn’t really know as many details as I had found out later. The more I heard about Van, the more I was like, ‘This is a really interesting man and a true, amazing American dream story-type of a life.’ [Paramyth Films and I ] were looking for the next project that we were going to start shooting with the new company we had, and their story just fit really well with what we wanted to go after. So, we talked to Van and Kelly and asked if they would be okay with us trying to do some research and maybe do a feature film on Van’s life and how he built the company. At first, they were like, ‘Well, we don’t really know if we want that kind of attention [and] spotlight on our lives,’ but then we told them what our ideas were and how we were going to tell everyone what their American dreams were. There are so many immigrants in America…I, myself, as an immigrant…and it was an interesting story to explore. That’s kind of how it all started.

What drew you to the story specifically?

For me, it was the story of a young man coming to America with a goal, with no money in his pocket, he didn’t speak English and the drive to achieve the American dream. There are certain types of people that no matter what they do, they’ll be successful because they have that drive…it was something that was really close to my heart.

Related Video: Watch Interviews with the real life characters and cast of “A Green Story”

What was the process like to make the film?

I spent about six months traveling around to Athens, to Chicago, to [Earth Friendly Products’] factories in L.A., and just learning more about Van’s personal life, and also the company and what it stands for. I was really impressed, it was quite an exciting adventure – both to learn and to wind up writing the script.

How long did it take to shoot the film?

We did shooting in L.A., Chicago and Athens. All together, it took us 20 days. We spent a couple of months prepping the film, and then about three to four months in post-production, and sound and music. Elton Ahi, this amazing composer, did all the music for us.

How did you decide on the casting for who would play Van and Kelly?

The idea for Van from the beginning was Ed O’Ross. Ed is an amazing character actor, and he’d been around the industry for a really long time – he’s a Shakespearean actor and has done everything from theater to film and TV. He starred in the first feature that I did [‘5 Nights in Hollywood’], and we stayed friends. He’s done numerous types of accents, and he was one of the few actors we found that knew actually the right [Greek] accent and the right way to talk. So it was Ed O’Ross that would play the older Van, and George Finn that would play the younger Van. For Kelly, that took us the longest to cast. We found out that Shannon Elizabeth was interested in going green, and she has this company, Animal Avengers. So when we found out about that, we reached out to her management. She read the script and really liked it, and we really liked the fact that Shannon was going to come on board and play Kelly. Malcom McDowell came on board after that and everything started to fall into place.

What was it like to get the film distributed?

The distribution was great because we got Indiecan Pictures. They came in and told us from the beginning that they wanted to do a theatrical release…we knew this was a special film and we didn’t want to rush it. The nice thing about Indiecan was that they took their time with trying to time it around Earth Day. Even though we were a couple of weeks over, it was still pretty close. They wanted to have the right [press] for it…it is a small movie, you’re not going to see trailers on television. Social media, like Twitter and Facebook, and bloggers that pick up from smaller blogs, and the Greeks have just been amazing with their support.

In what way have Greek people been supportive?

Not only did I visit the facilities for Earth Friendly Products in Chicago and L.A., I went to Athens, I went to Crete, and if there were any Greek organizations or Greek events, they were very helpful and everyone was willing to open their doors for me, and made me feel almost like a family member.

What are you working on next?

I’m in post-production on this project called ‘Tbilisi, My City.’ It’s the name of the capital of my country, and it’s 10-12 directors…each one did a short film set in the city of Tbilisi. All the short films are finished, and we’re just finishing up with the post-production, sound and music. Probably by the end of the year, it will come out.

I’m [also] looking forward to taking ‘A Green Story’ back to Greece because that’s where the story started so it’ll be interesting to see how it plays over there.

“A Green Story” is in U.S. theaters May 24, and is scheduled for a July theatrical release in Greece.