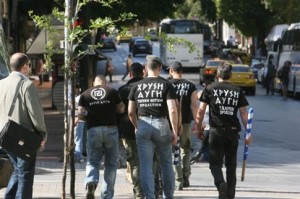 With most of the attention around the neo-Nazi Golden Dawn party centered around its anti-immigrant stance, the U.S State Department’s annual report on international religious freedom blames the extremists election to Parliament for an increase in anti-Semitism in Greece.

The report identifies Golden Dawn as  “a political party openly espousing anti-Semitism and racism and linked to violent attacks against individuals perceived to be immigrants, were elected to Parliament.”

The group, which got only 0.29 percent of the vote in the 2009 elections, won 6.97 percent to gain 18 seats in Parliament in 2012 but has risen as high as 13-14 percent in some recent surveys. It opposes the austerity measures being imposed by the government on the orders of international lenders and sends out vigilante patrols into high-crime areas to search for illegal immigrants it blames for the trouble.

The Greek government publicly condemned some anti-Semitic and racist incidents, states the report, though “observers called on the authorities to do more to counter hate speech and the violent actions of Golden Dawn members.” Prime Minister Antonis Samaras has been reluctant to after the party as he also wants all illegal immigrants out of the country and an anti-racism bill has been stalled in Parliament over debate whether it would make martyrs out of Golden Dawn.

There were also reports of “harassment and increasingly violent physical attacks against individuals perceived to be immigrants and refugees, many of whom were Muslim,” states the report, while “expressions of anti-Semitism increased after voters elected members of Golden Dawn to parliament.”

“(Golden Dawn’s) official newspaper attacked the teaching of the Holocaust in schools and, on the occasion of a visit by the executive director of the American Jewish Committee, stated that the Jewish lobby and Zionism conspired against Greek wealth,” notes the report, adding that some members of the Greek Orthodox clergy condemned violent attacks against immigrants, while others expressed their support for Golden Dawn.

The report further notes that the Greek Orthodox Church exercised considerable influence, while some non-Orthodox citizens complained of being treated with suspicion when they spoke of their religious affiliations.

“Members of non-Orthodox religious groups reported incidents of societal discrimination. Members of the Muslim minority in Thrace were underrepresented in public sector employment, and no Muslim military personnel advanced to officer ranks,” says the report.

The report further notes that planning for a government-funded mosque in the Greek capital continued, while some Muslim leaders had expressed their concern with regard to the lack of an Islamic cemetery in Athens, prompting members of the Muslim communities in the Greek capital and other cities to travel to Thrace for Islamic burial of deceased relatives or have the remains repatriated.

US Secretary of State John Kerry presented the report which indicates a sharp rise in displays of anti-Semitism worldwide. Special mention is given to Golden Dawn leader Nikos Michaloliakos who “had publicly and repeatedly denied the Holocaust, while he had made Nazi salute to greet his supporters in many occasions in the past”.

The report also notes that human rights organizations, such as Human Rights Watch, criticize Greek Police for making “little effort” to scale down Golden Dawn’s violent actions.  The Greek government has condemned the anti-Semitic and racist attacks. However, international observers have asked Greece to be more “active” in its dealing with Golden Dawn’s violent attacks.

The State Department’s report finally mentions that the American ambassador in Athens and American officials held meetings with their Greek counterparts and asked from the Greek government to publicly and strongly disapprove of Golden Dawn and its anti-Semitic actions.