More Greek Clothes Made in Balkans 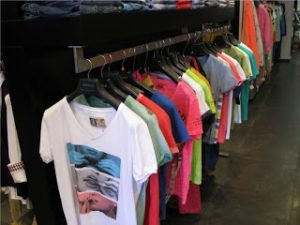 In the last years, hundreds of Greek clothing companies have been transferred to other countries in the Balkans, where the labor cost is lower and tens of thousands of workers in the production line of Greek garments can be employed.

According to a survey conducted by the Hellenic Fashion Industry Association (SEPEE), the main representative of the apparel and textile industry in Greece, at the end of 2012 there was only 23 percent domestic apparel production, while 77 percent was produced outside the country.

Bulgaria is the most important country for the production of Greek garments, as it hosts 57 percent of the production that takes place outside Greece. FYROM follows with 20 percent and China with 10 percent.

In the countries of Southeastern Europe there are currently operating around 270 Greek clothing companies that employ around 22,000 workers.

The main advantages for producing in the Balkans are lower labor cost, the small distance, production capacity, the existence of large sewing workshops, and the business environment which is associated with a different tax regime. For South Bulgaria, where the largest number of Bulgarian clothing companies is concentrated, Greece is by far the most important partner, as 65 percent of the clothing production is made for Greek firms.

Theophilos Aslanidis, general director of SEPEE, stated that although in the 70’s, 80’s and 90’s there was a stable growth in the clothing industry, in the beginning of 2000 the downturn started that took large dimensions in 2005, when restrictions on imports into the European Union were withdrawn and the European market was flooded with cheap Chinese clothing.