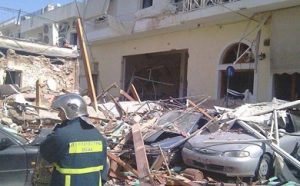 An explosion rocked a cafe on the island of Salamina, near Pireaus shortly before 10 a.m. on May 19, injuring 13 people. The tavern was closed and a memorial service was taking place in the Church of Aghios Dimitrios across the street. The explosion caused serious damage to the tavern as well as to the nearby buildings and cars.
According to the local authorities, two people were seriously injured and are in intensive care at Thriasio General Hospital in nearby Elefsina and another 11 people suffered minor injuries and were being treated in Salamina Medical Centre.
Firefighters, paramedics and a canine squad rushed to the scene to investigate the cause of the explosion, which may have been a gas leak, according to preliminary reports.