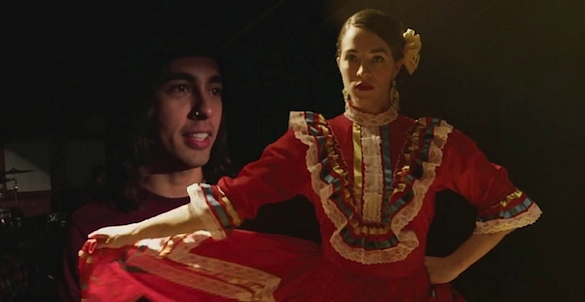 Greek-American actress Joanna Kalafatis stars in the new music video for “Bulls in the Bronx” by Pierce the Veil  from their latest album ‘Collide With The Sky’.

The video has gained great popularity on the web and it has almost one million views on youtube. Kalafatis plays a girl involved in a high school romance, trying to hide it from her overprotective father.

“There is a dream sequence in the song in which I dance a flamenco solo while the boy imagines he is a matador,” explains the New York born young actress.

“I studied Flamenco at Ballet Hispanico in New York City for seven years, and it was the reason I was called in to audition by Drew Russ, who directed the video.”

” The band was really great to work with, they have a very strong bond with each other and made the set a really fun environment.”

Pierce the Veil is an American post-hardcore band from San Diego, California. Formed in 2007, the group was founded by brothers Vic and Mike Fuentes after the disbandment of the group Before Today (formerly Early Times), which was formed out of the San Diego punk rock scene. The band, who is now touring Europe, is extremely popular amongst youngsters.

Watch the music video below:

Also take a look behind the scenes:

You can also visit the official site of Joanna Kalafatis.