Greece Not Gay-Friendly In Survey 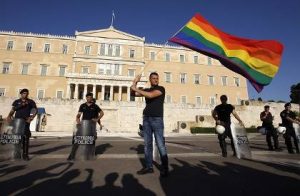 The ILGA-Europe, the European Region of the International Lesbian, Gay, Bisexual, Trans & Intersex Association, has published its Annual Review of the Human Rights Situation of Lesbian, Gay, Bisexual, Trans and Intersex People in Europe 2013 and ranked Greece 25th out of 49 countries on its treatment of people with different sexual preferences.
According to the review, “a wave of violence has left a negative mark on the year. In the wake of the economic crisis which is used as a platform by extremist groups to target several minority groups in Greece, a number of LGBTI activists and supporters have been victims of violence and threats from the neo-Nazi Golden Dawn party.”
ILGA’s European Office published the Rainbow Europe map on May 16, in which Greece scored 28 percent on a checklist of laws that include rules on nondiscrimination, gender recognition, same sex marriage rights and hate speech. Greece was put above Italy, Bulgaria and Fyrom among other countries, while the UK was at the top of 77 percent. Russia emerged at 7 percent as the least gay friendly country in Europe.
According to the review, Greece scored highest in terms of freedom of speech and assembly, but low when it comes to acceptance among families. In particular, the scores were: family recognition (8%), laws and policies against discrimination (13%), legal gender recognition (21%), protection against hate speech/crime (36%), asylum (50%) and respect for freedom of assembly and expression (100%).
The ILGA-Europe review was published on the eve of the International Day against Homophobia, Biphobia and Transphobia, which is being marked in Athens by a number of events on May 17-18, organized by the LGBTQ youth, Colour Youth.
ILGA-Europe is an international non-governmental umbrella organization bringing together 408 organizations from 45 out of 49 European countries. It advocates for human rights and equality for LGBTI people at European level organizations such as the European Union (EU), the Council of Europe (CoE) and the Organization for Security and Cooperation in Europe (OSCE).
ILGA-Europe strengthens the European LGBTI movement by providing trainings and support to its member organizations and other LGBTI groups on advocacy, fundraising, organizational development and communications.

Government spokesman and Deputy Minister to the Prime Minister Christos Tarantilis resigned his post on Sunday in a letter to Kyriakos Mitsotakis.
Charity