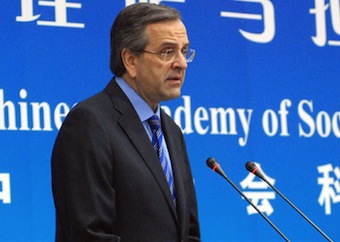 Greek Prime Antonis Samaras, hitting the ground running on his first day in China on a trip to secure investors, trade and tourists, invited the Chinese business community to invest in Greece and take part in what he called the “Greek success story,” downplaying his country’s crushing economic crisis which has a record unemployment rate and thousands of businesses closing weekly.
Speaking at the Chinese Academy of Sciences in Beijing, Samaras said Greece had restored its credibility by following orders of international lenders who put up $325 billion in two bailouts but demanded austerity measures in return that shrunk the Gross Domestic Product (GDP) by 25 percent in only a few years. But he said that’s behind Greece and that the country is beginning to turn around and offers great opportunities for investors and is a perfect vacation spot.
Samaras emphasized the importance of developing long-term strategic ties between Greece and China. The two countries have a shared notion of history, noted Samaras, adding that he would like China and Greece to have a common future. He added that there was ground for collaboration in the fields of infrastructure and tourism, among others. Besides Beijing, Samaras is expected to visit the cities of Hangzhou and Shanghai.
He is being accompanied by an entourage of about 70 ministers and deputies and businessmen from various sectors of the economy and representatives of the country’s privatization fund.
Keeping up his mantra of upbeat assessments for Greece, he said: “I know that China is investing everywhere – invest in Greece.” He added that, “The Greek comeback is already apparent. I would not be here if we hadn’t managed to turn the ship.” He invited Chinese interests to consider developing strategic network industries such as ports, airports and railways, and stressed that Greek companies were seeking collaborations in logistics and tourism.
“Whatever has yielded results so far in our relationship we shall reinforce. Whatever hasn’t we will fix,” he said. “We built our credibility in Europe and that wasn’t easy… Greece us building a success story, and we want China to be part of it.”