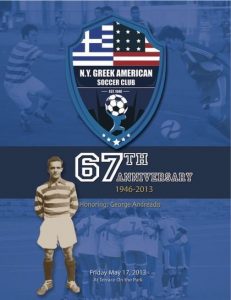 One of the best-known and most successful amateur soccer teams in the United States, the Atlas club of New York is celebrating its 67th anniversary this year with a dinner dance  Mr. and Mrs. Nicholas S. Gouletas, Chairman of the Board American INVSCO as well as George Andreadis, Owner of G.A. Real Estate.

The event will take place on Friday May 17 at Terrace on the Park, Flushing Meadow Park in Queens.
As owners of American Invsco, the Gouletas family carries one of the most highly recognizable names in Chicago real estate.

Gouletas, is an admirer of soccer and a supporter of the club’s efforts. During his long service, George Andreadis, a successful real estate broker, has been a staunch advocate of the  team too and offered much support over the years.

New York Greek American Atlas Soccer Club was formed by Tom Laris and is one of the most successful clubs in America’s annual national soccer tournament, the National Challenge Cup, winning four times, in 1967, 1968, 1969 and 1974.

The team is one of the oldest American soccer clubs in existence and plays its games at the Metropolitan Oval in Maspeth, Queens.