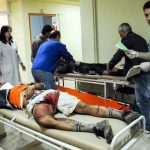 A recent shooting of 29 immigrant strawberry farm workers in Manolada led to quick calls on Twitter for a boycott of the product and spread so fast that producers in the area said their season might be ruined.
“We’re all from Manolada!” posted Stranger In Society. “We supposedly express our abhorrence for the … Greeks who shot those miserable workers from Bangladesh because they had the nerve to ask for what they worked for.”
The government moved quickly, arresting three foremen and the business owner and offered state protection to the wounded, but that did little to assuage the outrage.
In Manolada, the immigrants worked for 14 hours or more a day and lived in squalid conditions in tents, without toilets and without being paid. Their demand for back wages led to the shootings, authorities said.
“Whatever happened was wrong,” Effi Lambropoulou, a professor of criminology at Panteion University in Athens told Southeast European Times. “The workers should have been paid and the supervisors should not use the guns. It is against our ethos and mores, at least until recently. I hope it will never happen again,” she said.
The incident was borne from a sense of impunity for violence against immigrants, not unlike what African-Americans endured during the Civil Rights era, said Alex Afexounidis, a sociologist with the National Centre of Research in Athens. “They think they can do whatever they like. Deep American south revisited!” he told SETimes.
Some said that the incident revealed a lot going on under the surface in Greece during a time when the neo-Nazi Golden Dawn party, which has 18 seats in the parliament, has been accused of attacking immigrants. The party denied the allegation.
“The latest incident showed how an agricultural sector lives on the exploitation of migrant workers. How about the Greeks? The young jobless Greeks who according to statistics are jobless at 59.3 percent?” keeptalkinggreece said.
The blogger also criticized media coverage of the event. “Of course the media reported the subject, there were statements that denounced the event but the story doesn’t sell as much as, for example, when a Pakistani attacks a girl. And, of course, Golden Dawn, to keep it in the forefront in any possible way,” keeptalkinggreece said.
But, according to Stranger In Society, unfortunately this type of violence towards immigrants is not new. “Every ‘Manolada’ will remain a problem because it produces cash for those who don’t consider the fall of a society to a jungle a problem.”
(Used by permission of Southeast European Times, www.setimes.com)

Turkey announced on Monday that it will conduct a large-scale naval exercises in the Mediterranean and the Aegean Sea between February 25 and March 7.
Greek News

Greece confirmed 884 new coronavirus infections in the last 24 hours, with 7 of these identified at entry points to the country.
Environment