GRNews
GreekReporter.comHollywood'Hangover Part III' Release Date Pushed Up to May 23

‘Hangover Part III’ Release Date Pushed Up to May 23 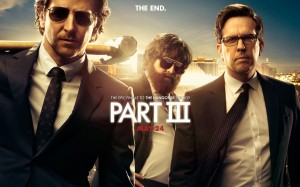 The third and final film in “The Hangover” series is hitting theaters a day earlier than expected. Originally set for a U.S. release on Friday, May 24, Warner Brothers has decided to push the date up to Thursday, May 23, with late showings on Wednesday.

According to a report in Deadline, “early exhibitor screening reactions have been sensational,” which is one of the reasons why the studio made the decision to bump up the date. “The Hangover Part II” also had its premiere over Memorial Day Weekend when it was released in 2011, and earned high numbers at the box office.

“The Hangover Part III” begins with Alan’s (Zach Galifianakis) dad passing away, and his grief sends him overboard. His three best friends (Ed Helms, Bradley Cooper, Justin Bartha) join together to help straighten him out, but on the way to a rehab facility, the boys are sidetracked by a gangster searching for Mr. Chow (Ken Jeong). Doug gets kidnapped and will only be returned in exchange for Chow. And the antics begin: