EU Urges Greece To Up Asylum 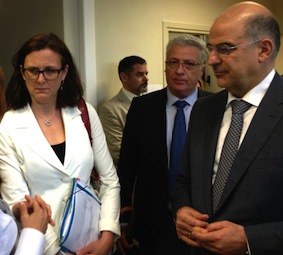 The European Union has called on Greece to review its asylum policies, especially for Syrians fleeing “atrocities” in their country. Greece grants asylum to as few as 1 in 100,000 applicants and the government has been acting to purge the country of those in the country unlawfully.
European Commissioner for Home Affairs Cecilia Malmstroem told a news conference after talks with Greek leaders that the number of people gaining asylum in Greece “continues to be very low, and I am particularly worried about this situation, especially about the Syrians. “Every day we hear atrocities about their country,” she added.
Greece has complained it has received little support from the EU to deal with waves of immigrants from Africa, the Middle East, Asia and Eastern Europe and has been left to fend almost by itself.
Malmstroem, who came to Greece to review the situation, said Syrian asylum seekers were “100 percent” protected in other European countries, while protection was “close to zero percent” in Greece.
“This must obviously change (and) the Greek minister told me that it will,” she said after talks with Public Order Minister Nikos Dendias, who is in charge of public order in the country struggling with a sixth year of continuous recession.
Malmstroem said Greece had made some progress in granting migrants and refugees the rights to which they are entitled, but “many migrants and asylum seekers are not treated with dignity and are being detained in unacceptable conditions.” Some infamous detention centers had also been closed but “conditions (in others) remain unacceptable,” and do not comply with European standards, she said.
But the EU has provided little funding to help Greece improve them as the country remains the entry point for a majority of immigrants seeking to get into the bloc as Greece is overwhelmed with the numbers pouring in from all directions, either to stay in the country or use it as a jumping-off point for other European countries.
But under EU law, only the country that is the entry point can grant asylum and Greece it can’t do that for the huge numbers who come in. The asylum review is also mostly in the hands of the police who have gained notoriety for supporting the anti-immigrant stance of groups such as the neo-Nazi Golden Dawn party that wants illegal immigrants deported, a stance backed by Prime Minister Antonis Samaras.
The EU and non-governmental organizations have repeatedly criticized Greece for violating migrants’ and refugees’ rights as they pass through the southeastern country on their way to western Europe but they haven’t offered any solutions to the practical and financial problems the illegal immigrants pose.
Malmstroem said 400,000 people were arrested in the EU last year for failing to present proper immigration papers, including 72,000 in Greece, 65,000 in Germany and about 50,000 in Spain.
She also expressed “serious concern” about a surge in racist attacks in Greece after Golden Dawn party entered  Parliament, and called on legislators to rapidly adopt a draft law making racism a crime, but the Samaras administration has withdrawn it. Golden Dawn was elected to parliament in June, winning nearly seven percent of the vote and 18 seats out of an overall 300 and it has benefited from its opposition to austerity measures being imposed on the orders of international lenders.
The party has benefitted from a rise in social tensions as Greece experiences a fourth year of strict austerity policies.
Many Golden Dawn supporters have been implicated in violent assaults against immigrants and the party is known for its anti-Semitic and xenophobic discourse.
The Council of Europe’s human rights commissioner Nils Muiznieks wrote in a report published last month after a visit to Greece that the government had failed to take proper action over the rise in hate crimes, particularly targeting migrants.