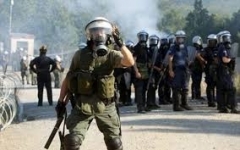 Three women from Halkidiki, northern Greece, who were arrested following more skirmishes between protesters and police at the Skouries gold mine faced a local prosecutor on May 13.
The women, aged 25, 39, and 40, allegedly tried to obstruct one of the mining firm’s vehicles from approaching the work site. Supporters were planning to gather outside the court building where the women were to face the prosecutor.
Police continued their search for an unidentified assailant who started firing at officers during the demonstration on May 12 with what appeared to be a hunting rifle.
One protester remained in a Thessaloniki hospital after suffering serious injuries during the clashes which left a female demonstrator and eight police officers with minor injuries.
The police officer was injured was rushed into surgery for treatment of a throat wound from a blow that seemed not to be from a shotgun but from a self-improvised hand grenade that a protester allegedly threw.