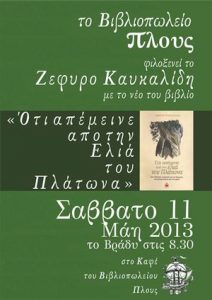 The Corfian bookstore, Plous (Sail,) is hosting a discussion with Academy of Athens award-winning author, Zephyros Kafkalides, on his new book, What’s left from Plato’s Olive Tree, on May 11, at 20.30, in the town of Corfu.
The discussion will take place in the bookstore’s café during a presentation of the book by Kafkalides, who has lived on the island for many years.
In the book, Kafkalides presents two friends who meet regularly and converse, following the patterns of the Platonic Dialogues. They are both in the twilight of their lives, so their memories are different from the “modernized” ones and they are carriers of an older and richest – from the humanitarian perspective – stage of the Greek culture.
They have chosen for their meetings, provided that the weather allows it, the rather symbolic small park, where it is, or it was, the so-called Plato’s Olive Tree. This ancient tree that has seen so much and so may over the centuries.
However, during the last century the tree saw itself surrounded by an axonic environment of natural disaster and then a bus falling on it and causing damage. And in the end, by the beginning of “annus horribilis” 2012, as Kafkalides says, it saw some people further taking it apart.
The two friends converse about the route of their homeland and try to clarify the guides of thought and reflection about the current situation, through teachings of the platonic philosophy and the world history.
The author was awarded by the Academy of Athens for another book, Stefanos Xenos: Scenes of the Drama of Hellenism in West and East published in 1999 by Kastaniotis editions. What’s Left from Plato’s Olive Tree was published by CaptainBook.gr in the beginning of 2013.