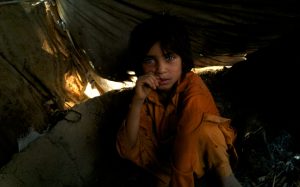 Doctors Without Borders and the Athens International Airport invite visitors to a different photographic voyage to the margin of contemporary cities. The exhibit, Urban Survivors,  will run from May 13 to August 30, and will present the works of Stanley Greene, Francesco Zizola, Pep Bonet, Alixandra Fazzina and Jon Lowenstein, all photographers of the Noor/Apeiron photo agency.
The photos were taken at shanty towns in Port-au-Prince, a city of the Caribbean country of Haiti, Dhaka, the capital of Bangladesh, Karachi, the capital of the province of Sindh in Pakistan, Nairobi, capital of Kenya and in Johannesburg. The aim of the exhibition was to unfold the everyday life of Urban Survivors, the people who live in degraded neighborhoods, the numerous problems they face and the help they receive from Doctors Without Borders in order to survive. The humanitarian organization intervenes in more than 20 shanty towns around the world treating malnourished children in Dhaka, victims of sexual abuse in Port-au-Prince or vulnerable immigrants in Johannesburg.
The exhibition, which has already been successfully presented in Hong-Kong, Italy, Belgium and in other countries, is being actualized with the cooperation of the Athens International Airport, the support of the photo agency Noor/Αpeiron, the Thessaloniki International Film Festival and the voluntary assistance of Pragma Group.

The first-ever written exam for Greek citizenship is scheduled for May 16, 2021, according to an announcement from the Interior Ministry.
Read more