Tsochatzopoulos Says He Can’t Be Charged 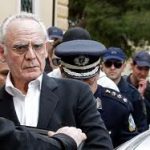 Lawyers for former Greek defense minister Akis Tsochatzopoulos have asked a court to throw out a laundry list of corruption and money-laundering accusations against him, arguing that the statute of limitations has run out on the cases and that he can’t be prosecuted legally.
Prosecutors instead argued that the court should reject all the objections raised by the former minister’s lawyers. Tsochatzopoulos is the main target in a case involving 18 other suspects who are on trial with him.
His legal team said that the state waited too long to charge him and that the 73-year-old shouldn’t have to face the court. He’s already been sentenced to eight years in jail, however, in another case for failing to declare his wealth as required by law.
His wife, Vicki Stamati, who is one of the defendants, was not in court, citing ill health, which occurs frequently in Greek trials. This case is the first prosecution of a major political figure in Greece in 22 years.
Tsochatzopoulos, who served as defense minister during the 1996-2001 period, is facing charges over taking bribes as part of the process of awarding procurement contracts. Two deals, worth about 3 billion euros, have been under particular scrutiny: the TOR M1 missile defense system and the purchase of submarines for the Hellenic Navy.