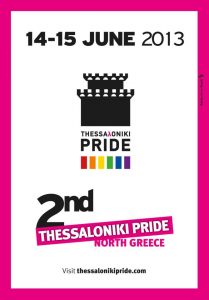 The second Gay Pride Festival in Thessaloniki is scheduled for June 14-15 under the slogan Free Minds, Free Bodies.
The festival will start with a big street party, while an art exhibition will be hosted at a cultural space. Thessaloniki Pride’s main events will take place around the monument and museum of the White Tower of Thessaloniki.
The first event took place last June with the backing of Mayor Ioannis Boutaris whose speech supporting it sparked some provocative reactions and there is opposition again.
The Orthodox Citizens of Thessaloniki is gathering signatures for a petition in protest and said they had already had 19,000 people support them.
The international term Pride denotes a series of events that may range from ordinary gatherings to parades, floats and parties. They concern the LGBT (Lesbian, Gay, Bisexual, Transsexual) population which is demanding what they said is the dignity that every person should feel in regard to their sexual identity, while also openly celebrating their diversity and culture.
It said the events are an expression of the demands, with the main goal of eradicating negative stereotypes, according to the Thessaloniki Pride website.

The Past 7 Years Have Been the Hottest on Record