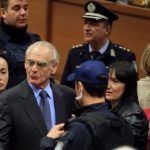 Former Greek defense minister Akis Tsochatzopoulos, on trial with 18 others for corruption charges including money laundering in an alleged scheme to steal hundreds of millions of euros from defense contracts, will have a civil suit filed against him by the government which received the approval of an Athens Appeal Court on May 8.
Tsochatzopoulos’ trial is the the first large-scale court case against a leading politician in the country since 1991 and has riveted public attention as it comes during ongoing austerity measures that have infuriated Greeks who believe the country’s politicians, rich elite and tax cheats are escaping sacrifice.
Tsochatzopoulos, who served as defense minister during the 1996-2001 period, is facing charges over taking bribes as part of the process of awarding procurement contracts. Two deals, worth about 3 billion euros ($3.94 billion,)  have come under intense examination, the TOR M1 missile defense system and the purchase of defective submarines for the Hellenic Navy.
Standing trial alongside the ex-minister and key socialist PASOK figure, who has denied the charges against him, is his spouse Viki Stamati and his daughter Areti Tsochatzopoulou. The trial will resume on May 9.