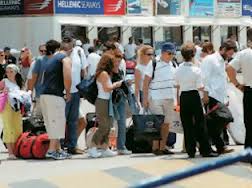 With Greece hoping for a record year for tourism and aiming at big markets such as Germany, the UK, the United States and China, a lot of neighbors are planning to come as well, including 70 percent of Serbia’s travelers, according to a poll from the National Association of Travel Agencies of Serbia (YUTA).
As reported by the website Vesti Online, according to the Director of YUTA, Aleksandar Senicic, the majority of Serbian tourists prefer Greece, followed by Turkey, Spain, Egypt, Tunisia, Montenegro and Croatia.
The Serbian newspaper Danas also reported that the purchase of tour packages in Serbia for this summer has shown a jump of 20% so far. At many travel agencies, the cheap tour packages for Greece during the months of low demand (May and June) are sold out, while in other agencies there are only few tour packages left, for Greek destinations  for the months of July and August.