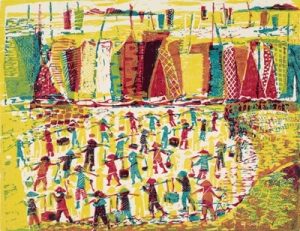 An exhibition of engravings and drawings from the Female Averof Prison of Zizi Makri will be hosted in Astra Gallery and will run until June 1. The retrospective exhibition is a tribute to Zizi Makri, a major figure in engraving, mosaic and tapestry-making, and to her oeuvre.
Inspired by her stay at the Female Averof Prison (1960-1961), because of her participation in the attempted escape of an official of the Communist Party of Greece (KKE), she created her works, which chiefly illustrate the criminal prisoners’ life at the beginning of 1960’s.
Makri’s works are accompanied with rare archival documents from the female political prisoners, as letter cards, handicrafts and cards, from the Contemporary Social History Archives’ collections.
Makri was born in 1924 in Belgrade. During the period 1946-1950, she studied engraving art at the École des Beaux-Arts in Paris. Her teacher was the great artist Demetrios Galanis, an Athens-born French Academician. In Paris she met with the sculptor Memos Makris who became her husband.
Makri has participated in exhibitions in Hungary and has illustrated works for Hungarian publishing houses. Having Budapest as her basis, she realized many trips that gave great inspiration for her artistic universe. She has traveled to China (1956), Russia (1962), Cuba (1963), Azerbaijan-Georgia-Armenia (1964-1966).
She has been distinguished in engraving, mosaic and tapestry-making, with many group exhibitions in various countries around the world. In Athens, she presented her oeuvre in 1963 for the first time.