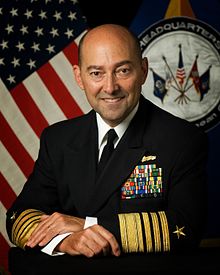 US Navy admiral James George Stavridis, who is now NATO’s Commander, will assume the position of Dean at the Fletcher School of Law and Diplomacy at Tufts University, which borders Boston. He will take the post on July 1.

Stavridis’ current position also makes him head of the U.S. European Command and he is the first Navy officer to head NATO.

Stavridis was born on Feb. 15, 1955 in West Palm Beach, Florida. His paternal grandparents were ethnic Greeks born and raised in what is now Turkey, who emigrated to the United States.

His 2008 book, Destroyer Captain: Lessons of a First Command, goes into more detail about his Greek refugee origins. “In the early 1920’s,” he wrote, “my grandfather, a short, stocky Greek schoolteacher named Dimitrios Stavridis, was expelled from Turkey as part of  ‘ethnic cleansing’ directed against Greeks living in the remains of the Ottoman Empire. He barely escaped with his life in a small boat crossing the Aegean Sea to Athens and thence to Ellis Island. His brother was not so lucky and was killed by the Turks as part of the violence directed at the Greek minority.”

A NATO exercise off the coast of modern Turkey was the “most amazing historical irony he could imagine,” and prompted Stavridis to write of his grandfather: “His grandson, who speaks barely a few words of Greek, returns in command of a billion-dollar destroyer to the very city – Smyrna, now called Izmir – from which he sailed in a refugee craft all those years ago.”