Greece Will Go After Racists, Xenophobes 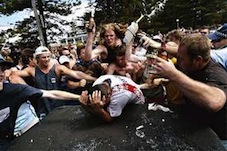 In the wake of repeated criticism from NGO’s and human rights groups too little has been done to combat rising assaults against immigrants, the Greek government is planning to introduce legislation calling for tougher penalties against racist and xenophobic crimes to comply with European Union directives.
Some of the assaults have been blamed on the anti-immigrant neo-Nazi Golden Dawn party which has denied them although admitting it wants all immigrants deported and would like to place land mines around the country’s border to keep them from getting in too.
SKAI TV reported that Deputy Justice Minister Costas Karagounis has the draft bill ready and is looking for broad support, not just from the three parties serving in the governing coalition.
According to sources, the bill foresees anyone found guilty of racist behavior, including in the media and on the Internet, facing between three and six years in jail and a fine of up to 20,000 euros ($26,000.) The penalties will also apply to acts of racist violence.
The Racist Violence Recording Network, a collection of 30 nongovernmental organizations initiated two years ago by the UN Refugee Agency (UNHCR) and the National Commission for Human Rights (NCHR), said in a report last week that a total of 154 racist attacks were recorded in Greece in 2012. It warned that such attacks were becoming more frequent and violent.
In November 2008 the European Council adopted the “Framework Decision on combating certain forms and expressions of racism and xenophobia by means of criminal law.” EU countries were obliged to transpose it into their national laws by November 2010.