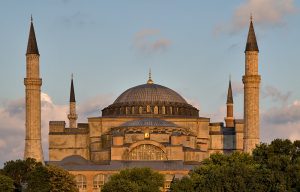 Turkish Prime Minister Recep Tayyip Erdoğan appears to be moving toward allowing Hagia Sophia, now a museum, to be opened as a mosque.

According to the Turkish daily newspaper Vatan, during a meeting between the executives of the ruling Justice and Development Party (AKP), Erdoğan was called to answer whether or not and when Hagia Sophia will start to function as a mosque.

He did not exclude the possibility of Hagia Sophia serving as a mosque and said “The Sultan Ahmed Mosque (i.e. the Blue Mosque) is empty during the hours of praying. When it will be full we can discuss the topic of opening Hagia Sophia for praying”.

Some took Erdoğan’s response as a vacillation and others as a first sign of plans for permitting the opening of Hagia Sophia as a mosque. In the last month, religious organizations in Turkey began a petition drive backing the use of the former Byzantine temple as a mosque.