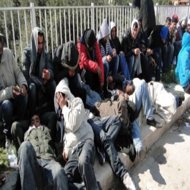 They hoped that they would find in Europe the promised land. But they were confronted with xenophobia, racism and Golden Dawn. The German weekly news magazine, Der Spiegel, published the article, A getaway from xenophobia, on the attacks against immigrants in Greece. The article refers both to the growing number of racist attacks in Greece as well as to immigrants’ efforts to leave the country.

“After they entered illegally in Greece many immigrants destroyed their papers, but now they queue up at their embassies only to go back to their countries. Europe does not offer them any prospect and in Athens they have to face the hate of right-wing extremists,” Der Spiegel wrote.

An immigrant from Pakistan declares that he fears to go out at nights because Golden Dawn members attack them and beat them. Daniel Esdras, Director of the International Organization for Migration office in Greece, confirmed the attacks and added that the immigrants want to go back to their countries because they cannot find work in Greece and they feel insecure.

They high rate of unemployment combined with wide cuts in social benefits have created an explosive social situation in Greece. “Police and public services cannot deal effectively with the problems of the immigrants and so the extremists gain ground. In the Greek national election in June of 2012, Golden Dawn received seven percent of the popular vote, enough for the party to enter the Hellenic Parliament for the first time with 18 seats. The party based its campaign on concerns for unemployment, austerity and the economy, as well as virulent anti-immigration rhetoric, which gained a large increase in support from the Greek electorate,” Der Spiegel concluded.