The Funniest Greek Easter Story Ever 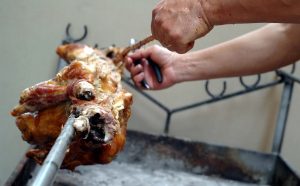 It all happened a year ago in a village near Preveza. The protagonist of this (true??) story decided to put aside the traditional way of roasting a lamb on the spit (Arni Sti Souvla), and instead of taking turns at the spit, he decided to use a motor.
Financially, he just couldn’t swing buying something new, so he ended up asking his friends for some handyman hints. He ended up creating a machine that was unique, to say the least.
The most important thing he had to have was the motor, given that he had all the rest of the hardware at home already. In his  basement he had an old, broken washing machine, the motor of which he attached to the spit along with an automated system to program the time.
On Easter Sunday, the proud owner of the new motorized spit watched his lamb turning and turning away while he and all of his friends stood around drinking wine and waiting to taste that delicious roast lamb.
However, our friend had set the motor at the maximum time program, which was approximately 2.5 hours, and in the last half hour he decided to restart the switch.
After a few hours the lamb was of course ready, spinning slowly based on the timer motor of the washing machine. But then, it happened.
While everyone was sitting at the table, the motor suddenly, automatically, entered the spin program. The unfortunate Easter lamb began spinning faster and faster and faster.  It spun round and round at such a speed that the Greek man couldn’t even grab the handle!
The next thing he knew, the Easter lamb had gone airborne. It hit nearly every single thing in the backyard that it could hit, and the meat flew everywhere in the yard, including onto all the friends and family gathered there.
So, a bit of a cautionary tale for Pascha… the above story proves that a washing machine motor might not be the wisest choice for spinning your Easter lamb. Otherwise, you’ll most likely end up starving yourselves. Happy Easter!

Can Earthquakes Be Predicted?