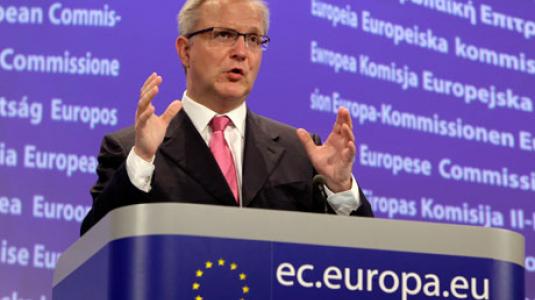 By VOA / Lisa Bryant – Hopes that the 17-member eurozone will finally emerge from its economic doldrums this year have faded, with new data Friday showing the recession in the euro area deepening even more than originally expected.
There were some bright spots in a slew of new European economic data, but the short-term prognosis for the 17-nation eurozone is not good. Overall growth is expected to shrink by 0.4 percent this year – deeper than the 0.3 percent forecasted earlier this year. And the eurozone’s second biggest economy, France, will slide back into recession.

Businesses and households are also having a hard time accessing credit, putting another brake on economic growth.
One of the most worrying indicators is unemployment – expected to shoot up to an average of 12.2 percent for the eurozone this year, compared to 11.4 percent in 2012. Unemployment for the full 27-member European Union is slightly better, at 10.5 percent.

At a press conference in Brussels, European Economic Affairs Commissioner Olli Rehn cited far more worrying figures for Italy and Spain, where unemployment is expected to peak at an alarming 27 percent this year.
“We must really do whatever it takes to overcome the unemployment crisis. Each EU institution will need to work within its own mandate, each member state, both on its own challenges, and jointly together as a union on our common challenges,” said Rehn.

Not all eurozone countries are suffering. Unemployment in Austria is less than five percent. In Germany it’s just over five percent. And separate data released Friday showed stronger-than-expected growth in Britain’s services sector, an encouraging indicator.

Rehn also was more upbeat for the EU region as a whole.
“We expect the European economy to stabilize in the first half of this year. GDP growth is expected to turn positive in the second half of this year and to gain momentum next year, 2014,” said Rehn.
Rehn said demand outside the EU will be the main driver for that growth.

The EU forecast comes a day after the European Central Bank lowered its benchmark interest rate to 0.5 percent, a move many analysts dismiss as insufficient in addressing the eurozone’s problems. The ECB has signaled it will be ready to act again, if the need arises.