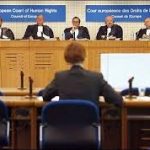 In yet another blow to Greece’s record of dealing with immigrants, the European Court of Human Rights (ECHR) has ruled that the country violated the human rights of two immigrants, one of them a minor and the other a woman, in two separate rulings.
The ECHR found against Greece in the case of an Albanian national, Albano Barjamaj, who was arrested in April 2011 for entering the country illegally and not possessing a valid residence permit. Barjamaj, a minor at the time, was remanded in custody for three days pending a decision on his deportation.
He complained that he was never notified of the decision to place him in detention and was only notified of the second decision three days after it had been taken, depriving him of the possibility of challenging its lawfulness, even though he had no right to be in the country.  The court found that Greece had violated the plaintiff’s right to freedom and security and ordered the government to pay him 2,000 euros ($2,612) in damages.
In the case of Georgian national Ketevan Chkhartishvili, the court held that Greece had violated Article 3 of the European Convention on Human Rights that prohibits “inhuman or degrading treatment or punishment” and ordered the Greek government to pay 8,000 euros ($10,450) for material and non-material damage.
After entering Greece with a three-month residence permit, Chkhartishvili was taken into custody pending a decision on her deportation. She f repeatedly challenged her detention and applied to have the decision to expel her overturned, but Greek courts rejected her requests. She was finally released in April 2010 and given 10 days to leave the country. The court found that the conditions of Chkhartishvili’s detention were in breach of European law.