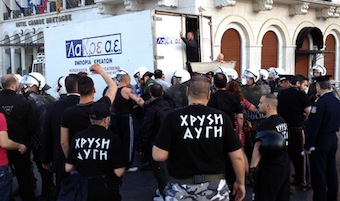 Athens Mayor George Kaminis made good on his vow to keep the neo-Nazi Golden Dawn party from conducting a Greeks-only Easter food giveaway on May 2 when police battled the extremists, blocking their van and then firing tear gas to stop the distribution before it started.
Golden Dawn had set up the handout, Easter Food for Greek Citizens, without getting permission from city authorities but sent a van to Syntagma Square across from the Parliament. Kaminis asked Public Order Minister Nikos Dendias, who has verbally sparred with Golden Dawn, to send in the riot squad.
About 40 members of Golden Dawn tried to push away the police forces. There was tension and limited use of tear gas. Two main streets, Amalias Avenue and Vasilissis Sofias Avenue closed. No one was arrested. The situation was normalized after 8 a.m. and the avenues opened.
Kaminis thanked the police for intervening and noted that: “We must keep the city standing and prevent its image from collapsing.” He said the incident was a “victory of the democratically constructed state,” and said the food giveaway was a theatrical performance and not a movement of philanthropy and solidarity.
Golden Dawn said in a statement that stopping them from giving lamb and eggs and other food products to Greeks only was unlawful and said the police had used tear gas on the elderly and poor. They said they would hold an “action of social solidarity” at their party’s offices. The party said it would give out food only to people who could prove they were Greek as they want all immigrants deported.