Sluggish May Day Protests In Athens 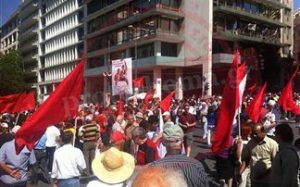 Only about 8,000 protesters took part in Greece’s May 1 general strike in Athens, a far cry from the nearly 100,000 that showed up last year, with many Greeks having already fled the city for their villages for the upcoming May 5 Easter.
Greece’s largest trade union bodies, ADEDY, the union of the workers of the public sector, as well as GSEE of the private sector workers, had called people to join the anti-austerity rallies in central Athens and other major cities.
We should also remind you that the government decided to move May Day celebrations to May 7, that is after the Orthodox Easter.
The biggest crowds came from Leftist organizations as well as the concentration of PAME Communists in Syntagma Square. The head of the major opposition party Coalition of the Radical Left (SYRIZA) Alexis Tsipras joined the march and said that, “Labor Day sends the message that the half million unemployed, the thousands of workers in precarious jobs, the thousands of households without an income, the thousands of young people who immigrate abroad are not the burden of our country, but the hope and power of Greece.”
He added: “They are our strength to change the future. The economy will not be resurrected neither by the bankrupted banking sector, nor by the corrupted political system. Economy will be resurrected by the working class and its fights. They want workers in the margin because they are afraid of them. We want workers in the forefront to rebuild Greece”.
Ferry and train services were stopped and many offices were closed, but many people had already left the cities in Greece and were going about the business of preparing for their first Easter without holiday bonuses, which have also been stopped.
The labor unions are upset with the plan to remove public workers, who supposedly have Constitutional protection against being fired, but Prime Minister Antonis Samaras said that doesn’t apply in cases where agencies are being merged or phased out.
Among those set to go are disciplinary problems, workers who’ve faked credentials, don’t show up to work or have committed felonies – including murder – but are still on the payrolls.
Unions are also angry that the austerity measures have created a record 27.2 percent unemployment rate. The country’s statistics agency ELSTAT also said that they have caused a drop of more than 30 percent in retail sales in the last three years.
Trains and ferries were cancelled and hospital staff walked off the job. About 1,000 policemen were deployed in central Athens to handle any violence during the rallies.