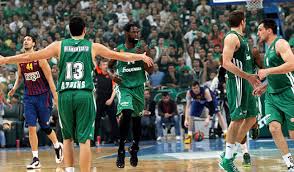 Euroleague Basketball has sanctioned Athens Panathinaikos to play four closed-door games and imposed a fine of 100,000 euros for illegal acts which took place during the Greek team’s quarter-final series against Barcelona. Panathinaikos’ offenses are the use of illegal sirens, flares and firecrackers as well as the violation of the official capacity of the OAKA stadium for the two matches against the Spanish team.
Euroleague deprecated the team’s fans’ attitude, “All visiting teams must assume that, whenever they come to Athens, they are very likely to face unsportsmanlike conduct by some home spectators as well as disturbance of all sorts and nature.” At the competitions official website we also read: “Euroleague Basketball’s independent disciplinary judge made specific emphasis on the list of violations recurring at Panathinaikos home games during the last two seasons and on the potential physical danger to fans, players and game officials due to the ongoing violations.”
This is the second fine for Panathinaikos this month, as the team was recently fined 150,000 euros after the first game of the series, when the team’s president, Dimitris Giannakopoulos, accused officials of exercising influence on the final score, of 72-70, where Panathinaikos was defeated by Barcelona.
As the Guardian reports, the six-times Euroleague champion Panathinaikos was also fined 9,000 euros earlier this month for incidents caused by its fans during a regular-season home game against CSKA Moscow.