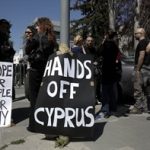 The Cypriot Parliament, by the slimmest of margins, 29-27, gave approval on April 30 to an international bailout package that critics said will condemn the island country to years of hardship, recession and unemployment – but which the government said would save it from bankruptcy and chaos.
President Nicos Anastasiades’ ruling center-right Democratic Rally party and its lone ally, the Democratic Party, had half the 56 seats in Parliament and needed the deciding vote from right-wing European Party leader Demetris Syllouris to swing the tide.
The Troika of the Troika of the European Union-International Monetary Fund-European Central Bank (EU-IMF-ECB) said it would put up 10 billion euros ($13 billion) but only if the government raised another 13 billion euros ($17 billion) through big confiscations of bank accounts and austerity measures.
“If there was another realistic alternative, our decision would surely be different. Unfortunately, we have no other choice,” said Democratic party leader Marios Garoyian.
The Communist AKEL and Socialist EDEK parties voted against the deal they said undermines the country’s sovereignty and would lead to social hardships. “Our vote cannot be positive to the prospect of national, state and economic subjugation,” said Parliamentary Speaker and EDEK leader Yiannakis Omirou.
The government had warned the agreement’s rejection will mean the country’s economic collapse and possible exit from the euro, which is used by 17 European Union countries.
Anastasiades had earlier appealed to lawmakers to act with the national interest in mind. “What we’re called upon today to do is to adopt a loan agreement that will allow our country to breathe and to give us the chance to overcome whichever problems we’re facing amid this crisis,” Anastasiades told reporters.