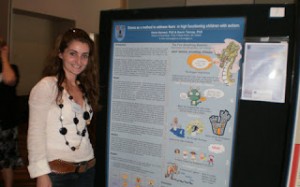 Greek scientist Haris Karnezi will will visit Australia for a third time, invited by an Australian university to teach its students how theater can be used as a way to treat autism.

In her previous visits, Karnezi participated in a conference on autism which took place in Sydney where she presented the findings of her research, as well as in a conference in Melbourne during which she also gave lessons to educators on her Cognitive Behaviour Drama-CBD model.

Next month, Karnezi will visit New York City to present the conclusions of her research entitled Understanding the World Through the Theatrical Form at the 34th Annual International Conference on Mental Retardation and Developmental Disabilities.

Karnezi was born and grew up in Athens. She worked as a professional actress and drama facilitator for 10 years prior to her engagement in autism research. Her educational qualifications include a BA in theater studies from the Athens School of Dramatic Art in Greece; an MA in Drama in Education (DIE) from the University of Central England in Birmingham, UK; and a PhD in Psychology from Trinity College Dublin, Ireland.

Over the course of her PhD, Haris had the opportunity to work on a regular basis with over 50 children on the autism spectrum. This experience gave her an invaluable insight into their needs, and the impetus to develop an intervention model to address them.

Her commitment to the research of autism and the quality of her scholarly output is evidenced in the honours and awards she received throughout the duration of her studies. These include a three year scholarship from Trinity College Dublin (2004-07), funding from the Irish National Council for Special Education (2007), and a TCD Postgraduate Research Award (2007).

Following the success of the CBD model as evidenced in the research findings, parental reports and the participants’ enthusiasm to continue with the sessions after the completion of the research programme, Haris had set up collaborations with special schools and clinics in Dublin and in Melbourne. To date, over a hundred children have enjoyed the benefits of the CBD model.